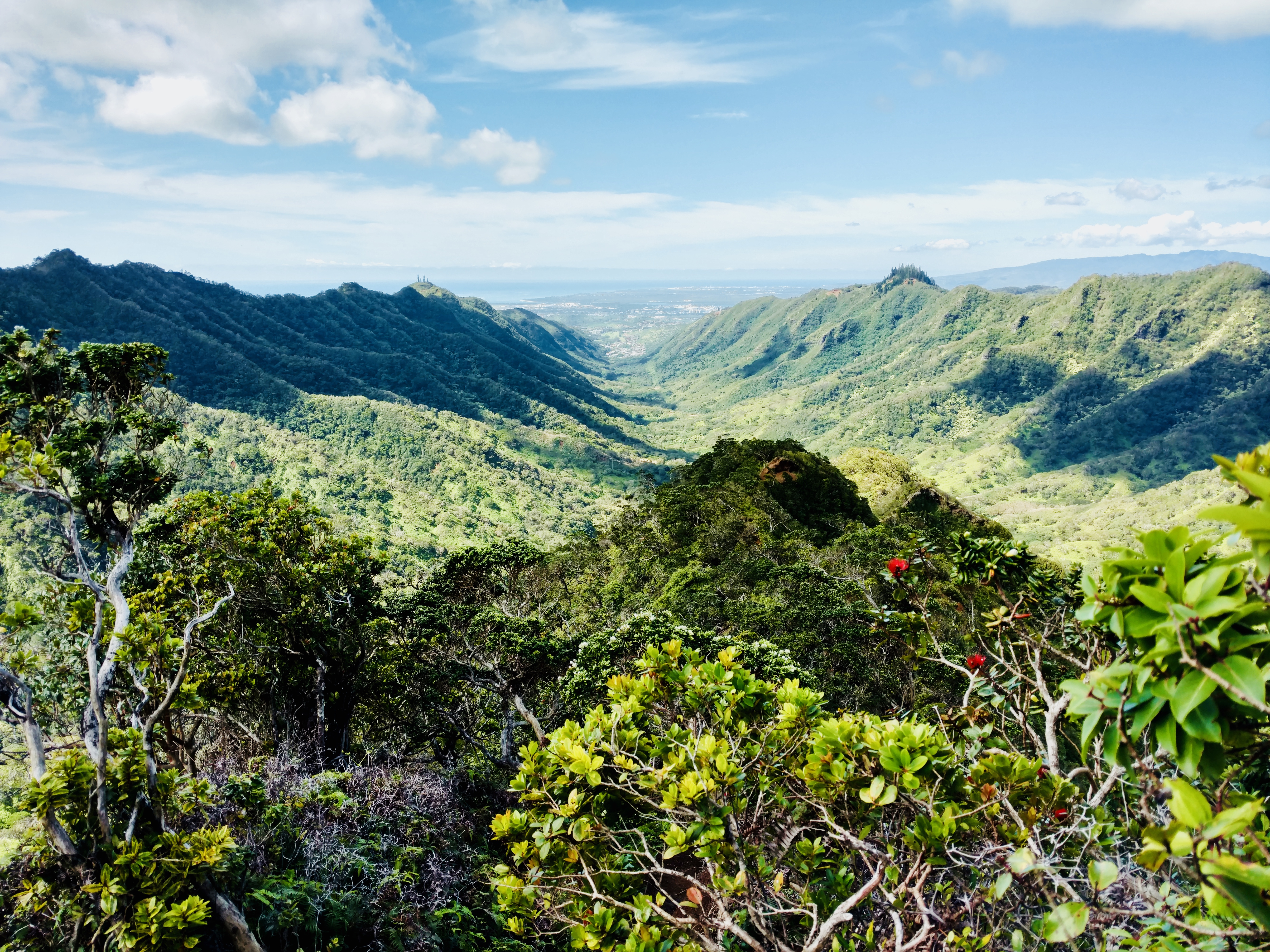 Scaling the Stairway to Heaven in O’ahu

After three action-packed days on the Big Island, we were ready for O’ahu, another short plane ride away.

Why Travel to O’ahu, Hawai’i?

O’ahu is more developed than the other islands and has the cultural diversity you’d expect from a frequently traveled tourist destination. Waikiki, the main city in the capital of Honolulu offers an urban feel with tall skyscrapers and ethnic eateries while still having breathtaking views and beaches. A short drive from Waikiki will have even more to offer including pristine waterfalls and of course the gorgeous beaches that Hawai’i is known for. Just expect much bigger crowds than on any of the other islands.

We had previously been to Oahu and had enjoyed many of its splendors back in 2015. This time our main goal was to complete the stairway to heaven hike, also known as The Haʻikū Stairs, which lived up to its name….

How Long To Stay In O’ahu, Hawai’i?

A difficult question to answer that depends on many different factors:  How many days do you have? What’s your budget? Will you be coming to Hawaii again? Leisure vs Adventure? Etc.

O’ahu, by far, has the most flights in and out-of the island. In fact, most flights to the other islands require you to first stop in O’ahu. For that reason, and because we had already been there once before, we chose to spend the least amount of time on O’ahu. Additionally, we know that any time we visit Hawaii we could spend two to three days on O’ahu prior to leaving and knock more items off of our list.

As far as must-do’s on Oahu, we strongly recommend carving out one day for the legal hike to the Stairway to Heaven (do research to understand what is legal, versus not legal and consider if you have the physical capabilities). We also highly recommend a couple of days driving around the island with stops at many of the famous attractions. It’s easy to get around and the drives along the coast and through the mountains/jungle are incredibly beautiful. Take a look at our top suggestions/things we did from our most recent visit (3 days) and our trip from 2015 (7 days) to try and build your own itinerary. We don’t have shopping, restaurants, or nightlife as “things we did” but there are plenty of options on the island that can also take up more time in your plans.

Top Things To Do In O’ahu, Hawai’i

The Stairway to Heaven Hike (also known as the Haiku Stairs) is a towering series of stairs up into the Ko’olau mountain range. Doing this hike was the most incredible thing we did on our entire trip throughout Hawai’i.

The most direct route to and up the stairs is through private property and is illegal to take. There is however a back route that we took that is legal up until a certain point. This trail was even more beautiful than the stairway itself.

The entire hike took us about eight hours roundtrip with several stops for pictures and enjoyment. The hike is unique as there are several ropes installed to help people climb the steep inclines, and there are several spots where you are hiking on the spine of the mountains.

When we reached the top there was a large radio tower. We stopped here to eat lunch before starting our descent of the Haiku stairs on the other side. Here was our first glimpse:

We ventured down several of the >3,900 steps into a cloudy abyss. Unfortunately, the clouds never parted, but looking at google images, we can see how beautiful it would have been. We didn’t continue all the way down the stairs as this is where you would reach private property and security guards are known to wait at the bottom and cite trespassers. Also our car was on the opposite side of the trail, hours away.

We have included some of our favorite photos above from the hike, but see more in our picture-based story posted in the following link: “Picture story of Haiku Stairs Hike in Oahu, Hawaii.”

Diamond Head is a large volcanic cone that is a dominating sight at the Southeastern Edge of the island. You are able to hike around the cone on man-made paths that offer many vantage points of the coast and Waikiki. Expect large crowds, but a nice hike with plenty of views.

Tip: Depending on time of year, there may be huge crowds. You should ask around and consider getting there earlier in the day to avoid the rush and wait for parking.

One of the most well-known beaches in the world, a two-mile stretch of white sand along the south shore of Oahu, lined with high-rises and boutique resorts. Due to its gentle waves and generally calm waters, Waikiki Beach is the perfect beach for many to flock to or learn how to surf. (Ala Moana Beach Park):

Top Things We Did Last Time/Suggestions in O’ahu, Hawai’i

We were fortunate enough to have spent a week on Oahu back in 2015. Some highlights of our trip that year were:

This itinerary stars from Waikiki with stops at Pearl Harbor, the Dole Plantation, and Sunset Beach in less than two hours (one-way, driving time only)

Hop in a rental car and enjoy the scenery. You can squeeze in a lot of attractions in one day all while enjoying breathtaking views of the coasts, mountains, and city.

We visited the memorial of the infamous 1941 bombing attack that brought the United States into WWII.

A beach within a nature preserve where you can get some of the best snorkeling on the islands. Expect an abundance of coral and sea life. You may even be lucky enough to see sea turtles.

There is a bit of a hike to get down to the beach but there is an option to take a trolley for a part of it.

The Hālona Blowhole is a rock formation that when the waves hit the rocks, water spews out similar to that of a whales blowhole.

Seeing the blowhole was cool, but the coast and the rocks surrounding it were really neat themselves.

There is also a small beach cove on the (west) side of the Halona Blowhole that shouldn’t be missed.

You have to hike down some sharp rocks to get down to the semi-hidden beach.

The waters here can get dangerous so you shouldn’t swim out too far.

We were lucky to spot a Hawaiian Green Sea Turtle swimming in the beach cove.

One of the best places for an adrenaline rush – cliff jumping at 30 feet.

A famous surfer’s beach on the North Shore with crazy high waves in the winter and calm waters during the summer.

As you enjoy the scenic drive around the eastern coast do not miss the magnificent view of Makapu’u Beach. From there, people hike the steep hillside to the famous lighthouse, where you can get a complete view of the coastline.

Hiking up more than 1,000 stairs of old railroad ties, does that sound awesome or tiresome? We’ll go with both.

Or at the very least a really good leg workout. It is a moderate hike that’s easy to navigate, but not for the faint-hearted. As you climb this “Stairmaster” there is not much to hold onto. There is a section that is flat, however, it is a bridge with a 40ft drop below. It’s not as bad as it sounds, just watch your footing and try not to look down. You can always bear crawl, like many people we saw.

The panoramic views from the top are very rewarding.

Experience a backyard-style Hawaiian Lūʻau, where dancers and performers take you through the cultural heritage of the Polynesians through the art of story and dance.

This was a first luau and we had a great experience with Germaine’s. They had tasty and refreshing drinks, delicious buffet style food, and brightly colored dancers.

8) Kayaking and Paddleboarding in Kailua

A cool feature of this location is Popoia Island (Flat Island), a fossilized coral reef that is a State Seabird Sanctuary about a quarter mile off the shore.

Star of Honolulu, Hawai’i’s largest dinner cruise ship, is a fun and romantic way to see the coast, enjoy all-you-can-eat crab legs, and see the famous Hawaiian sunset from the waters.

Onboard the historic Battleship Missouri, where Japan officially surrendered and WWII came to an end.

Where To Eat in In O’ahu, Hawai’i

Once again, we cooked our own food. But from both of our trips here are some places we did try:

You should definitely try their specialty, the Malsada, a Portuguese fried donut without a hole.

Stop in for some delicious Mexican food with a Hawaiian infusion.

Star of Honolulu (on our Sunset Dinner Cruise)

The cruise ship offered unlimited crab legs which were almost as good as the Hawaiian sunset. 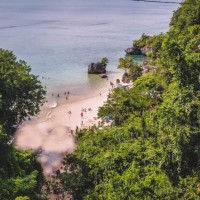