A trip to Granada won’t leave you asking for more.

Why Travel to Granada, Nicaragua?

On the shores of Lake Nicaragua lies the “Jewel of Nicaragua”, the city of Granada. In this sun-scorched corner of the country you will find a city lined with pastel-painted and well maintained architecture. You can’t help but admire how photogenic the city is! If you visit Nicaragua and don’t stop in Granada then what ARE you doing here?

It’s easy to enjoy the splendor by only walking the city streets. Looking for more activities? A short bus ride can having you swimming comfortably in a lake inside an extinct volcano. What’s that? You want more? Another bus ride away can have you hiking an active volcano. Still not enough? How about visiting a super active volcano that allows you to peer into it’s burning red caldera and inhale it’s noxious fumes? Need I say more? Granada truly is not to be missed, so don’t you dare.

How Long to Stay In Granada, Nicaragua?

As we only had allotted two full days to Granada, we jam-packed each day to the fullest. In hindsight, a couple more days would have been better to further explore Granada’s surroundings. The first day was consumed with church-hopping, strolling the vibrant historic streets, and an evening trip to the active Volcano Masaya. That was just the first day guys. On our second and (highly-anticipated) final day, we escaped to relax in a caldera (an extinct volcanic crater lake is more than 200m deep), the deepest in all of Central America. No big deal..ok it was pretty sweet. Yes, I said RELAX in an extinct volcano. Did we mention we are volcano enthusiasts?

With so many more activities to do and volcanoes to see, at least four days would have been satisfactory. Alas, there is always next time.

Top Things To Do In Granada, Nicaragua

The first day we got into the city, we walked around Central Plaza, which provided us a perfect backdrop of the city’s enriched life. As you can see, there are plenty of eye-pleasing churches and charmingly painted buildings around every corner.

The Catedral de Granada is one of the most charming churches of Granada, not to mention it was first built in 1583! The Catedral is hard to miss as it lies in the city’s main plaza of Parque Central and welcomes you with it’s bright yellow hue.

This 16th-century church also contains a bell tower where you can climb a narrow spiral staircase to get the best panoramic views over the city.

From within the staircase windows you can see Lago Cocibolca (the largest freshwater lake in Central America) in the near distance.

We stumbled upon this impressive weathered 16th-century Baroque church that was originally built in 1534. The bell tower is climbable ($1USD) and (supposedly) has comparable (if not better) panoramic views of the cityscape.

An elegant old church that has been restored since being destroyed during the Civil War. The Baroque-style church of Iglesia de Xalteva is said to house some beautiful woodwork that may be worth a visit.

This towering church was incredible to look at from the outside alone. We stood here in pure awe just marveling at its unique blue and white trimmed façade. Regretfully, we did not have a chance to visit inside. Supposedly, there is an elaborate wooden alter and a lavishly decorated interior that is a sight to see. Beautiful inside and out.

It’s a short walking trip to visit all of these churches as mapped out below.

Things got hotter in the evening when we went to visit the mouth of an active volcano. A trip to the Masaya Volcano National Park is one you will likely have not experienced in your lifetime, unless you do this sort of thing all the time (you volcano connoisseur you). The park is home to two volcanoes and five craters with the most recent eruption occurring in 2008. There are many different hiking trails available, however many were “closed until further notice” due to activity at the volcano when we were there. Due to our time constraints we did not to partake in any hikes and instead chose to take a nocturnal bus tour visit to the Caldera.  The experience was enjoyable, however was very, very, very touristy.

Our experience began with a short van ride from Granada to what seemed to be a never-ending queue of cars outside the park entrance. After hours of anticipation, finally, it was our turn. We excitingly jumped out of the van and walked up to the edge of the caldera. We were immediately met with the noxious smell of gases being emitted directly into our faces. But there it was, the luminous red and yellow lava churning in the pit. We could hear the sounds of the rumbling volcano below. Being able to experience all of these sensations from the depths of the crater was pretty awesome. Deep down I was hoping for a sudden jut of lava, some sort of added excitement, but the crater kept its eerie calmness.

If you haven’t seen an active volcano and/or are short on time, we would recommend taking the night tour as we did. However, we would strongly suggest an alternative method if possible. If you can organize a hike of the area or an extended viewing of the caldera, that would be better. Additionally, if you have other volcano destinations on your travel itinerary the night tour of Masaya could be one to miss. However, the night tour drives you right up to the caldera, whereas other locations may require hiking. (Sometimes very strenuous hiking such as our favorite hike of Acetenango in Guatemala).

PSA: Please respect others and try and be quiet while viewing.

Swimming in a 23,000 year-old sleeping volcano crater. Yup, that is exactly what we did on our second day in Granada at the Paradiso Hostel and Restaurant in the Apoyo Natural Reserve.

The crater of Apoyo is a PERFECT destination for any and all visitors. Most people come to this tranquil lake to relax and lounge, but as per our usual itinerary, we made sure to get in some activities before relaxing. The first thing we did was take a two-person kayak and challenged ourselves to reach the other side of the crater.

Naturally, the wind was against us the whole time. After a struggle of almost 2 hours, with Kurt’s hands blistering, we noticed we had barely gotten halfway to the other side. We threw in our paddles, (not really, that would’ve been silly), and headed back. Now, for some relaxation. We had only 5 hours to spend at the Paradiso Resort before the last shuttle took us back to our hostel, so, we tried to fit in as much as possible.

We got in some tubes..

jumped off and lounged on this floating platform..

sipped on some juice cocktails..

and simply enjoyed the view.

With cool turquoise water and serene beauty, seek out the enticing Laguna for yourself and see why SO many flock here.

Where to Stay In Granada, Nicaragua

GM Granada is a lovely hostel located less than a mile away from downtown Granada that comes with all the necessities. One of the great features of GM Granada is they assist you in booking all your local tours. Oh yeah, they have a turtle pond too, how cute is that?

Where to Eat in Granada, Nicaragua

A delightful cafe/bar that offers some delicious local Nicaraguan fare, classic breakfast foods and cocktails to boot in a garden setting. When in town, you simply MUST stop in.

In the mood for a brick oven pizza or a freshly baked treat? (We highly recommend the banana bread). You’re welcome.

Want to get a taste of something familiar? Then you should stop by an international favorite- Subway (lol). It probably has the #1 rated view of any Subway. Historical church and volcano included with the price of a foot-long. 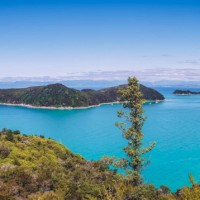